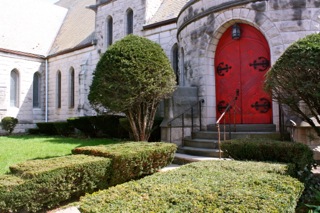 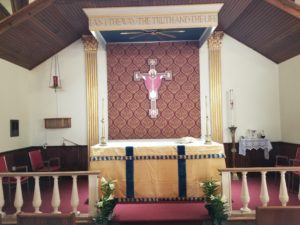 Christ Church was founded in 1868 and the first church services were conducted in a local schoolroom. Two years later, the congregation had grown and members constructed a church building that would seat 233. Tragically, fire destroyed this building on the Sunday before Christmas Eve in 1888. The members, however, quickly built an even larger, stone edifice on the same site that would seat over 700 worshipers. That building survives to this day.

Christ Church had a history of excellence in church music and an appreciation for the arts. For many years the congregation had a choir of men and boys that was part of the Royal School of Church Music. Christ Church also boasted one of the finest Austin organs in the area. The building contained beautiful stained-glass windows that portrayed biblical themes and depictions of saints and leaders in church history, from Archbishop Thomas Cranmer to the first Anglican missionary to the American colonies.

Actively involved in its community, the members of Christ Church offered educational services and provided soup kitchens to feed the hungry and homeless as well as a clothing bank where those in need could purchase clothes at very low or no cost. These ministries were recognized in 2000 when the Executive Council of The Episcopal Church declared Christ Church a Jubilee Ministry Center.

Situated on Main Street in Orange, Church of the Epiphany began its life on Pierson Street. Founded by African Americans when other local Episcopal congregations refused to welcome them, Epiphany boasted a proud history of community involvement by sponsoring programs to support the growing black community in the Oranges. Headed by Fr. George Plaskett, who first served the parish as a seminarian and then as rector for 50 years, Epiphany began as a Sunday school for “colored children” on Oakwood Street in 1905. Classes and services were first held in a room of the Old Orange YMCA and were led by clergy from what later became our present church building, the former Grace Episcopal Church.

The congregation grew steadily under leadership of then seminarian George Plaskett and lay leaders.  In 1909, the congregation purchased a lot on the corner of South Center and Pierson Streets and broke ground for a new church building on September 19, 1910 with the cornerstone being laid on November 6th. The first service was held on January 29, 2011. The Bishop dedicated the new building on the same day.

Epiphany continued as a mission of Grace Church until 1916 when the fledgling church’s leaders informed Grace Church that they would no longer accept the small mission subsidy from Grace and they would be responsible for their own financial affairs. Despite being financially independent of Grace Church, Epiphany maintained its ecclesiastical connection with Grace Church until January 2, 1930, when it became incorporated as a parish, later admitted as such in the Diocese of Newark.

The Pierson Street church building boasted many fine church appointments. The Botticino marble altar, designed by the Gorham Company of New York, was richly ornamented with gold mosaics and religious emblems, combining Greek, Roman and Anglo-Saxon architecture. The floor of the sanctuary around the altar was likewise of marble inlaid colored designs and tessellated border. The church building also boasted numerous memorials dedicated to various members of the parish.

The fiftieth anniversary of the parish was marked by the erection of the Egbert Chapel-Plaskett House on Webster Place in 1956. Its purpose was to furnish facilities for youth activities as well as church services. The Church of the Epiphany has had a marked influence on the life of the community, especially with young people. Epiphany, like Christ Church, had an active adult choir and offered feeding and clothing ministries to its neighborhood.

In 1986, the Bishop of Newark asked Epiphany to leave its Pierson Street location to migrate across Main Street to take up residence in the then-abandoned Grace Church. This was a painful move for many Epiphany members but the journey was made and the former mother church building became the new home for its one-time daughter. Because of this move, Christ Church and Epiphany existed just blocks from each other but in different municipalities. They conducted almost identical outreach ministries to their respective neighborhoods.

In recent years both congregations experienced decline in membership and the large plants both congregations worshiped in sapped their financial strength. Lay and clergy leaders in both congregations had begun conversations to explore ways in which the two congregations could share ministry. However, in the summer of 2015 the financial burdens at Christ Church become extreme and the vestries of both churches accepted the Bishop’s suggestion that they move in together “under one roof” at Church of the Epiphany’s location. Because there had already been discussion about shared ministry, it was possible for both congregations to move quickly through the canonical and legal steps to consolidate as a single new parish in the fall of 2016.

Now known as Church of the Epiphany and Christ Church, the new parish continues to serve its neighbors through feeding ministries and clothing banks that provide food in soup kitchens and pantries that operate four days a week. We are proud of our growing children and youth ministries and other parish organizations have been enriched by uniting our varied and similar backgrounds. We firmly believe that while the process of consolidating as a new parish was challenging and even painful for some, we are responding to what God is calling us to be and become in the New Creation.